The Department of English was founded in 1948. The present faculty strength is 14. We teach B A (Honours) English and BA Programme with English as a Language and as a Discipline Subject in combination with other subjects. In addition, we teach various literature and language-based elective courses to all students across streams. We also tutor students pursuing their MA English at the Faculty of Arts, DU. 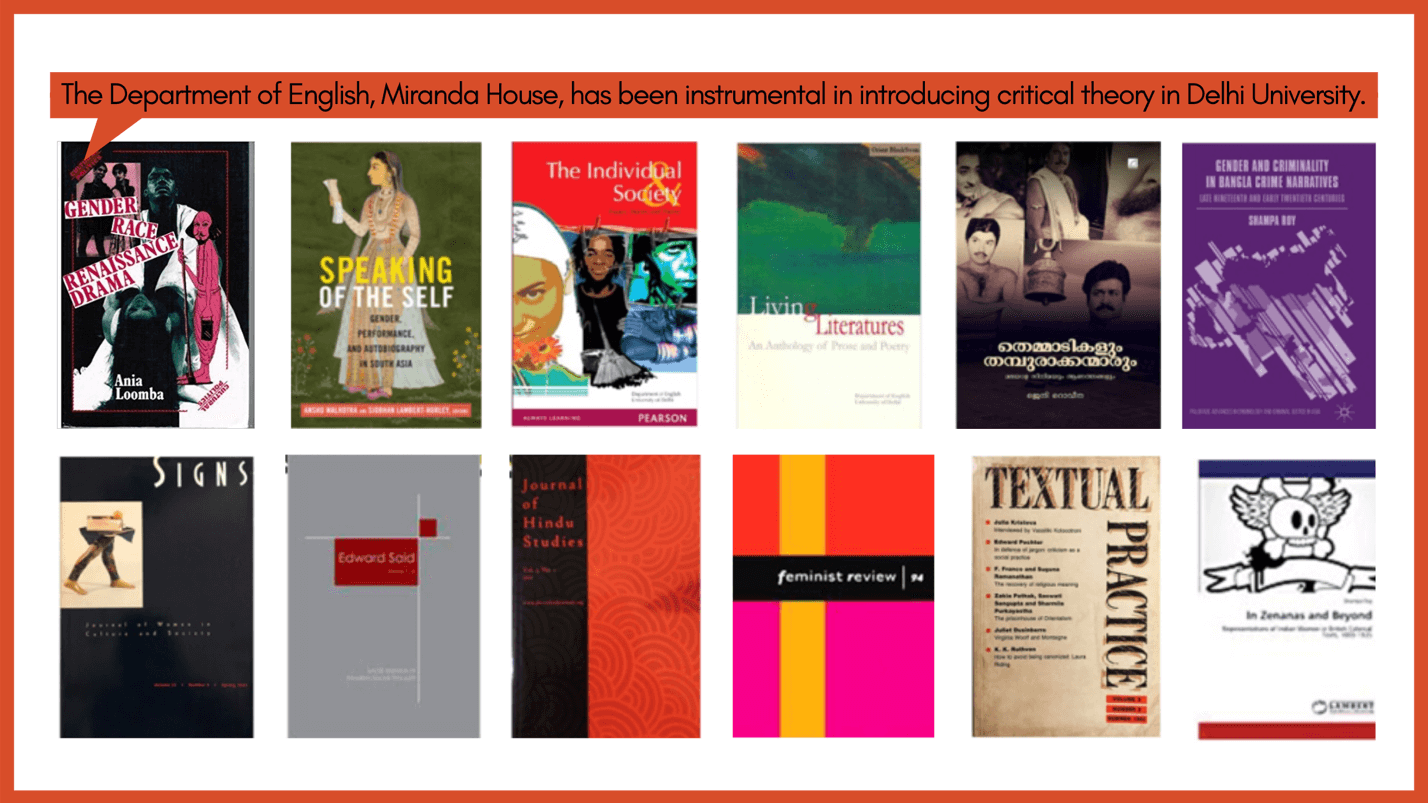 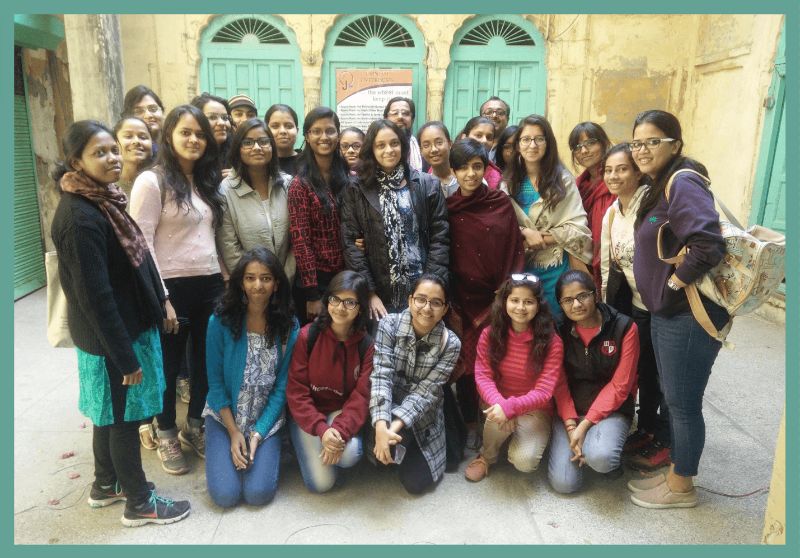 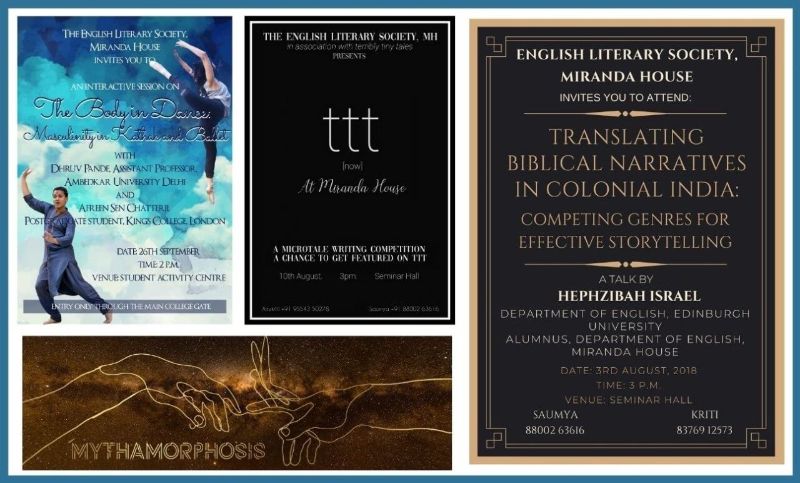 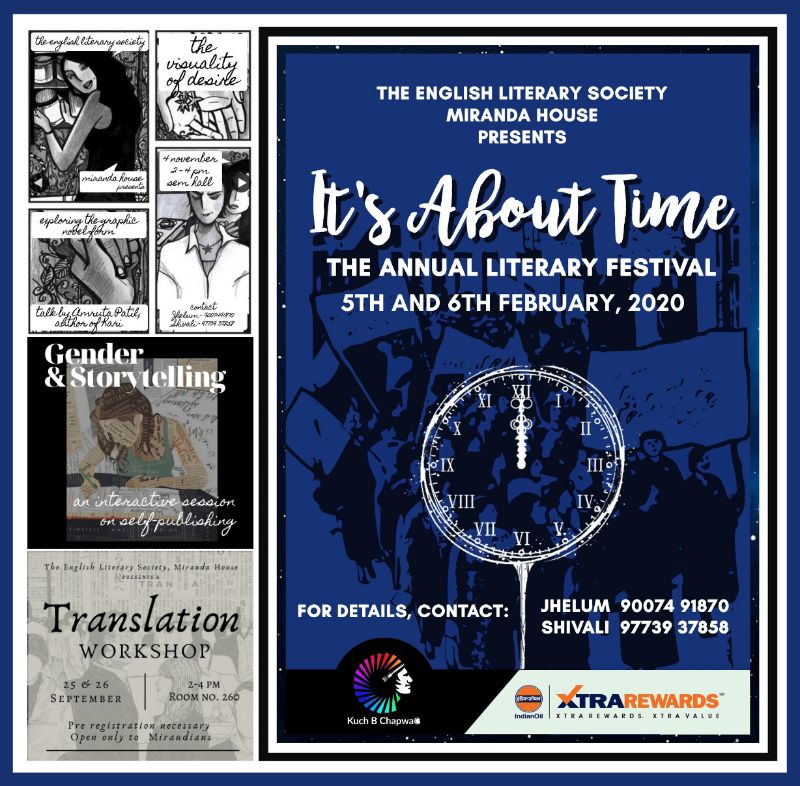 Our students continue to excel in their academic performance across college and the University. Many of our students secure University ranks at the Undergraduate or Postgraduate level. Our results for the year 2018 are as follows: 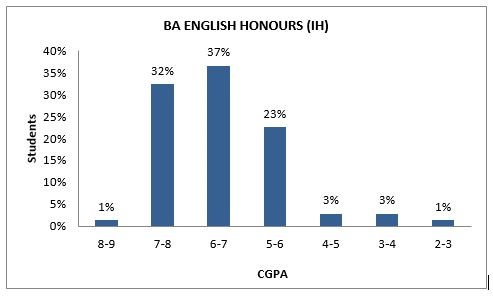 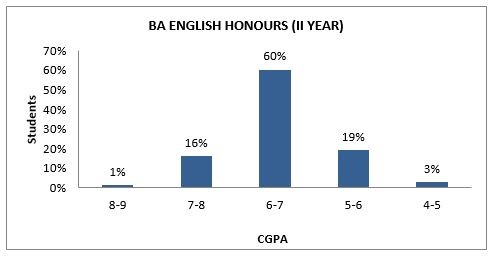 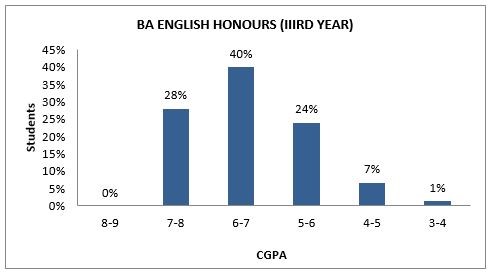 Our faculty members are passionate teachers and committed academics who engage continually with texts, their histories and politics in classroom lectures as well as through interdisciplinary projects, seminar presentations and writings in reputed journals, books and monographs. 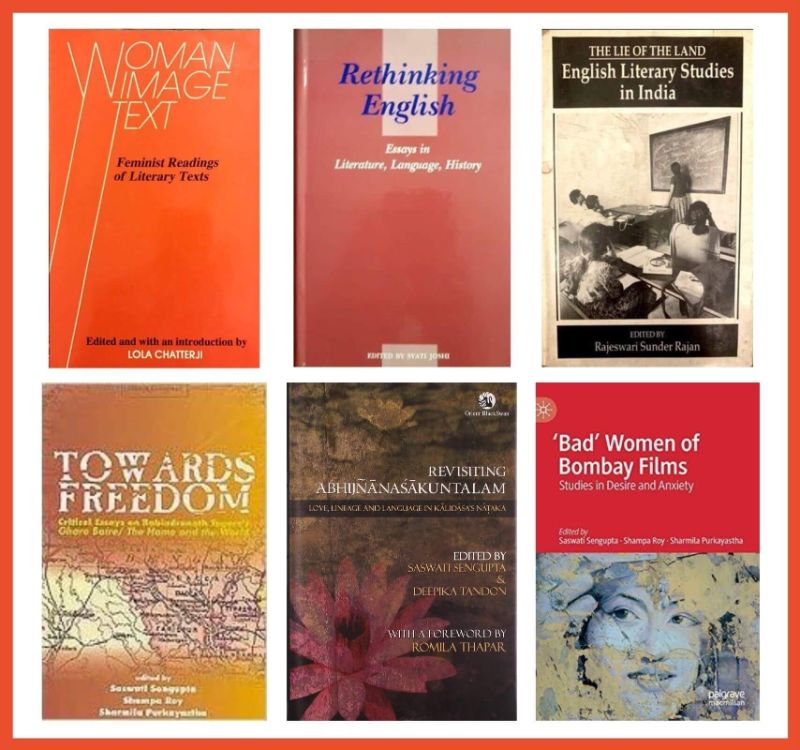 In 2015-16, Shweta Sachdeva Jha was the Principal Investigator for an interdisciplinary Innovation project, under the Delhi University Innovations Grant, in collaboration with the Department of Elementary Education. A children’s book titled Chhutki and Cheero (authored by our alumnus, Manjari Singh) emerged out of this collaborative project. 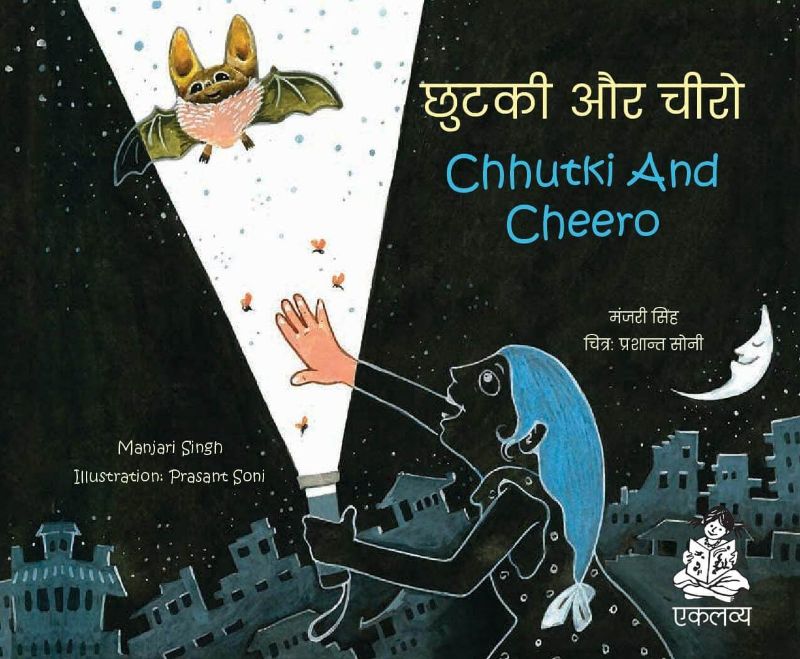 Teachers of this department, however, are not just writers of academic papers and volumes. Members of our faculty have also written poetry and fictions (or translated them) that have been widely read and appreciated. Some of these have also been nominated for or have won extremely prestigious awards. Retired members of the Dept., Malathi Rao, Manju Kapur and Ira Singh have published fictions and Late Masooma Ali has translated novels from Hindi to English. Of our present faculty, Saswati Sengupta has published The Song Seekers (Zubaan Books and Chicago University Press, 2011, nominated for the DSC Prize for South Asian Literature, 2013) and Meera Sagar’s poems have been published in journals like the Four Quarters and Best Indian Poetry, and her translation of Stephenie Benson’s French shorty story was awarded the 1 st prize by Alliance Française de Delhi (2004). 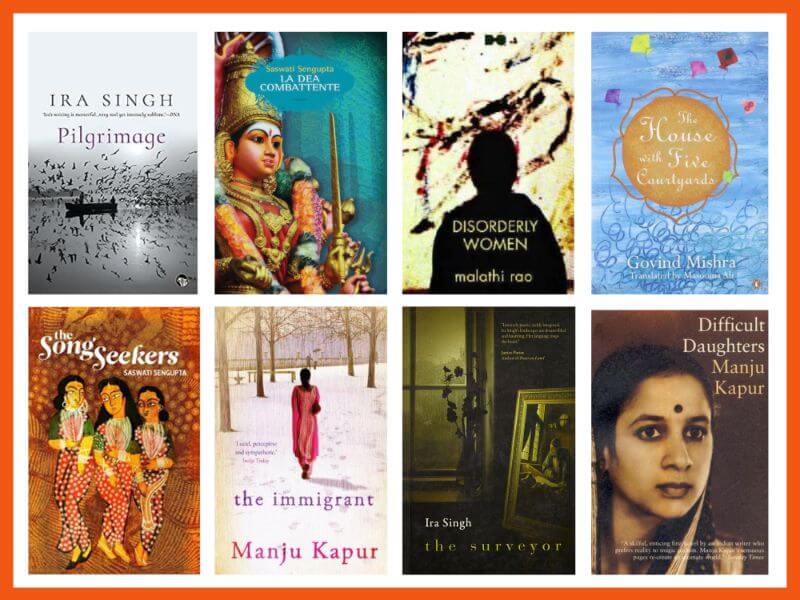 Our faculty members have been awarded prizes, fellowships and grants for teaching and research. Saswati Sengupta (2004), Shampa Roy (2000, 2008) and Devjani Ray (2015) were awarded the Charles Wallace India Trust (CWIT) for short term research. Saswati Sengupta was felicitated as Distinguished Teacher by the University of Delhi in 2009. Shweta Sachdeva Jha was awarded the Max Planck Fellowship to work with the Centre for History of Emotions at the Max Planck Institute for Human Development, Berlin (2010); Sharmila Purkayastha was awarded the Nehru Fulbright Postdoctoral Fellowship (2016-17); Shampa Roy won the Charles Wallace India Trust Fellowship in Literary Translation (2019); Gorvika Rao received grants from Wikipedia (2019) and Equality Labs (2019) for researching women’s history month and Dalit history month; and Shweta Sachdeva Jha was awarded the Amba Wadia Fellowship (2019-20) established by the SNDT University for creating a photographic archive of Miranda House.

Several well-known personalities have graduated from this department, beginning with Jasleen Dhamija who joined in 1949 and wrote these lines about her college times:
“In 1949 I joined Miranda House, the new college on the Delhi University campus. We were the hip girl students….Delhi University was a hotbed of student politics, romance, scandal and intrigue. It was here that we acquired our skills for the big world. It was while looking after the leftist relief committee for students that I honed my organisational skills and later, as president of Miranda House, helped organise events.” The Seminar (2002). Jasleen Dhamija is arguably the best-known textile art historian and she has done pioneering research in the arena of handloom and handicrafts. 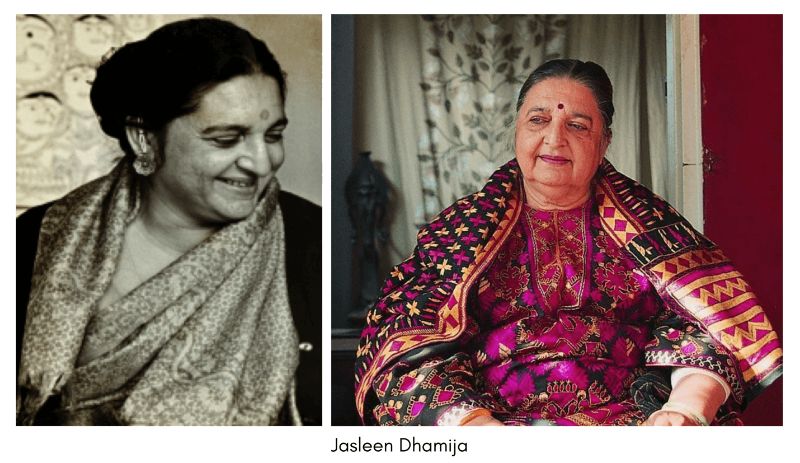 Compare Jasleen’s memories with what Ankita Anand has to say about joining the Department in early 2000s: “In my first few months in college, when someone asked me if I felt homesick, I realised I never got the time to. It was also my first time in a women’s only institution. But, if anything, I only felt more comfortable and confident here…..before college, we women were aware of gender discrimination. But our teachers gave us the tools to articulate that injustice, and the confidence to fight it.” Daily O, (October 28, 2018). Ankita also was the College President and she’s a well-known journalist who won the Lorenzo Natali Media Prize in 2015. 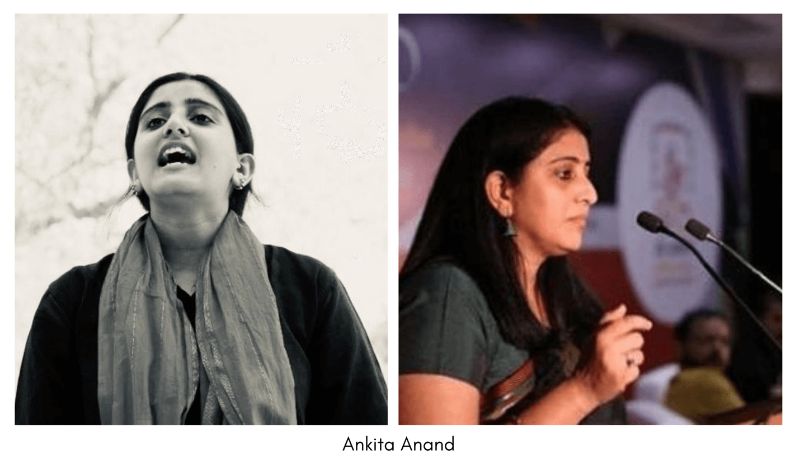 After securing the 22nd rank in the prestigious all-India UPSC examination in 2019, Deeksha Jain said: “My alma mater has the best of faculty, great infrastructure and students…I did BA (Hons) in English and MA (English) from Miranda House. Whatever I am today is because of the five years spent in this college.” The Fact Express (April 10, 2019). 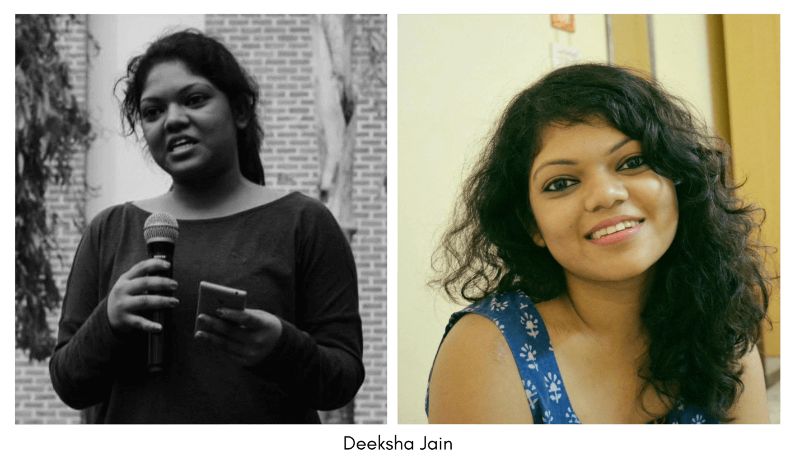 For over 70 years, our students have learnt to build their understanding of the world outside through classroom interactions, extracurricular activities, and participation in academic, cultural, and other activities outside the college. When they go out of college after completing their graduation and/or postgraduation, our students are strong and confident.

‘Education is not the filling of a pot but the lighting of a fire.’ –W.B. Yeats. We believe in this maxim and one of our alumna, Vandana Khare, has made an endowment in honour of her teacher, the Late Zakia Pathak and each year one student is selected on the basis of merit and financial need and awarded the Zakia Pathak Award. Details of the same are available in the college prospectus. 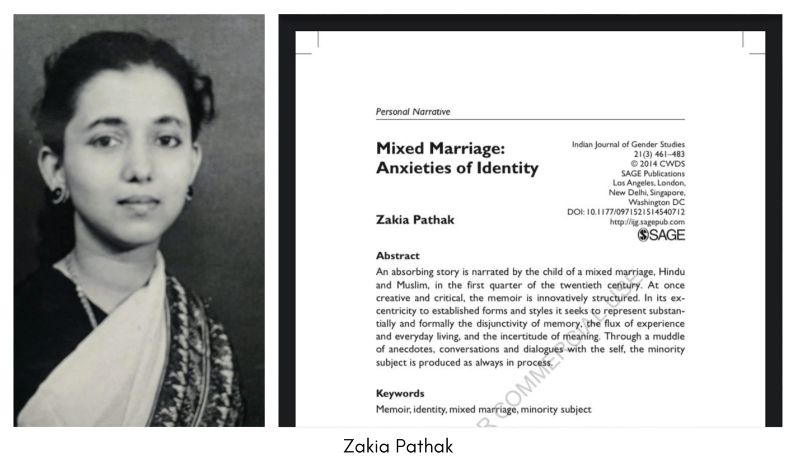