The Department of Political Science, Miranda House is committed towards creating an environment that encourages students to think critically and engage with important questions that extends beyond classroom learning. To this effort, the department has been engaged in organising workshops, seminars, and interactive sessions. With the objective to equip students with the tools of learning and capacity building process, needed to become empowered and conscientious citizens. 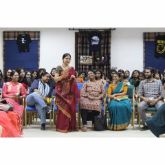 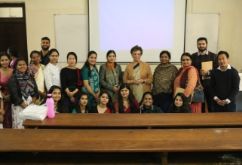 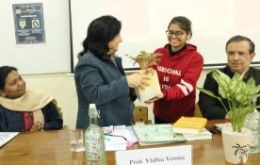 The department of Political Science had its annual fest Ecclesia on the theme- ‘HazaronKhwahishein- A decade defined by Youth’. As a part of it, the department organized a T-Shirt painting competition, debate competition, slam poetry competition and photography competition. Prof. NeeraChandoke was invited to be the keynote speaker to talk on the topic “The Role of Youth in Civil Society” and Prof. Manoranjan Mohanty was invited for the valedictory address on the topic “Youth and Democratic Polity”. There was also a Round Table Discussion on the theme “Role of Youth in Environmental Protection and Activism” by John Paul Jose, climate change activist, writer and global peace ambassador. The department also invited two catering groups of the Somali and Afghani refugee women called Ilham and Macquul respectively and various other stalls.

The Department of Political Science organized a seminar on the topic, “Exploring women’s experience while travelling in India”, with Dr. Caroline Bradbury, Dr. Louise Ishan and Dr. Dana Summut from the University of Birmingham, along with Dr. Rashmi Singh from the Manas Foundation. The Seminar was mediated by Dr. Bijaylaxmi Nanda, the acting Principal, Miranda House. The session was a very interactive and enriching one where the students and the speakers exchanged knowledge and experiences, concerns and doubts were cleared and various different voices were heard speaking their own experiences. It was indeed an enlightening seminar. 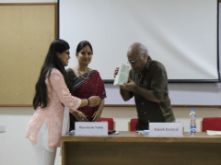 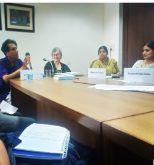 The department organized the first lecture of the Public lecture series on “why Constitutional Democracy Matters?”, chaired by Prof. Ujjwal Kumar Singh. The speaker spoke extensively on why Democracy as a govt. is a structure through which we can maximise our capacities and how constitutionalism is important to check arbitrary power. He further taught the students a lesson that questioning isn’t opposing but a medium to gain knowledge.

The Department for commemorating 200 years of Karl Marx organized a lecture series named, “Commemorating 200 years of Karl Marx: Lecture series”. The second lecture was chaired by Dr. Sunny Kumar, Assistant Professor, Department of History, Miranda House on the topic, “Marx on Identity and discourse of Rights”. The lecturer spoke about the importance of Marx’s method of critique and his perception of Identity in relation to the contemporaries of his time. The Third lecture on the series was chaired by Prof. Kamal Mitra Shenoy, on the topic of “The Marxist Idea- Rosa Luxemburg, Antonio Gramsci and Louis Althusser. Prof. Shenoy focussed his lecture on the political thought of Marx and various aspect of his theory, and by focusing on Luxemburg and Gramsci’s idea as well. The fourth of the series was chaired by Dr. Sharmila Purkayastha on the topic, “Gender and the problem of Praxis: an examination of Marxist- Leninist Movements of 1970s”.

The Department organized the “AuthorsSpeaks” Series where the first was given by Prof. R. Kanth, Economist, Philosopher, Social Thinker, Harvard University. The lecture was on the topic, “Rethinking Everything – Questioning Eurocentric Renditions of the Human Prospect” where the students were introduced to the broader aspect of Eurocentrism, it’s harmful effects and his ideas of Euro Modernism. The speaker also discussed about how it is a critical contemporary need to focus on issues related to climate change. The second speaker on the series was by Mr. Genevive Vaughan, a semiotician, a peace activist, feminist and philanthropist on the topic “Women and Gift Economy”. The lecture enlightened the students about the meaning and practice of gift economy and how it emerges as immensely important alternative to capitalism. The third on the series was a lecture by Prof. Vidhu Verma, JNU came to talk to the students about her work Secularism and the Nature of the State and the approach she has taken towards these concepts. The session was chaired by Prof. Amitabh Mattoo.

The fourth was a webinar with Prof. Ujjwal Kumar Singh and prof. Anupama Roy. The discussion took place about their book, “Election Commission of India”. The fifth series was again a Webinar chaired by Dr. Luis Cabrera whose session focussed on his work “The Humble Cosmopolitan: Rights, Diversity and Trans- State Democracy”. The book highlighted on Dr. B. R. Ambedkar as a “humble cosmopolitan” who has offered powerful resources to address diversity objections against institutional global citizenship. While discussing the limitations of cosmopolitanism, Ambedkar’s contributing ideas from ideas from “Disposition of Political Humility” and the concept of social endosmosis also come to light. 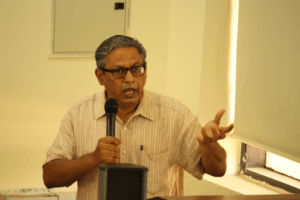 The department organized an interactive workshop with the faculty and the students of the University of York, chaired by Prof. Anupama Roy and Dr. Bijaylaxmi Nanda, Acting Principle, Miranda House.

The second session in continuation with the University of York was chaired by Dr. Rakesh Batabyal on the topic, “the British Rule in India”, followed by Prof. Ashok Acharya on the topic, “Gandhi’s life and teaching”.

The Department in collaboration with the B.A. Programme department organised the “Legal Literacy Workshop” wherein several eminent lawyers and judges in collaboration with the “Delhi State Legal Authority” were invited to help students understand the nuances of legal rights and laws. The event was open to interaction which birthed several interesting aspects of discussion among the students.

The department organized a grassroots comic workshop around the theme “Women’s struggle for Equality: Epic and Everyday”, in collaboration with Women’s Development Cell, Miranda House. It was chaired by Sharad Sharma, World Comic India. It provided students an opportunity to acquire skills and become a part of a publication, and to receive a certificate of Participation from World Comic India and Centre for Women Development Studies. 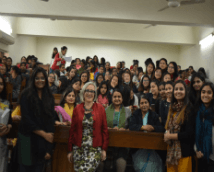 The Department in collaboration with Snapshots, the Photography Society of the college set up a pictorial exhibition on the topic, “From Raj to Swaraj” depicting the India’s journey to freedom.

The Vigilance Awareness Week was celebrated from 3oth October 2019 in Miranda House and this was anchored by the Department of Political Science in collaboration with Tula, Miranda House Consumer Club. The event started with the Program Coordinator Dr. Jayashree Pillai’s address to the audience where she urged them to make integrity as a way of life. Thereafter, the Acting Principal, Dr. Bijayalaxmi Nanda administered the ‘Integrity Pledge’, where the students vowed to work together to eradicate corruption by performing all tasks in an honest and transparent manner, acting in public interest and exhibiting integrity in personal behavior, by reporting all incidents to the appropriate agency. The pledge was followed by a Flash Mob that assembled to take forward the cause of vigilance and accountability through catchy slogans, urging people to make India corruption free. Mr. RajitPunhani, Chief Vigilance Officer (NTPC) was the keynote speaker. Further, a Quiz Competition and Elocution were held in which many students participated. 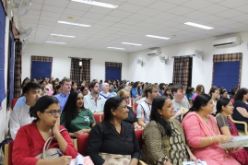 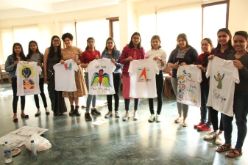