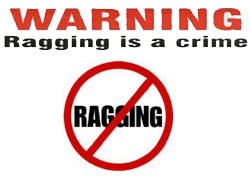 According to Ordinance XV-C, ragging means any act, conduct or practice by which dominant power or status of senior students is brought to bear on students freshly enrolled or students who are in any way considered junior or inferior by other students and include individual or collective acts or practices which

Students of the College are expected to behave responsibly, both inside and outside the College. Ragging in any form is a criminal offence and is strictly prohibited. Any occurrence should be immediately reported to the Anti-ragging Committee.

Ordinance XV-C has laid down rules regarding prohibition and punishment for ragging:

The Principal of the College is authorized under the Ordinance to take immediate action on any information of the occurrence of ragging. Any student found ragging freshers may be either expelled, rusticated for a specified period or the results of the student/s concerned in the examination in which they appeared be cancelled.