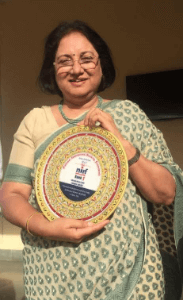 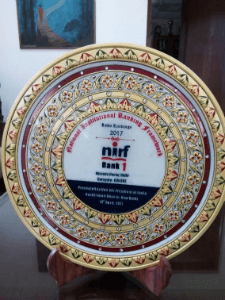 Miranda House received All India Rank One amongst Colleges under NIRF 2017. The India Rankings report was released on 3 April 2017. The Hon'ble President of India Shri Pranab Mukherjee felicitated the awardees under different categories at an award ceremony held at the Rashtrapati Bhavan Auditorium on 10 April 2017. Also present was Shri Prakash Jadvekar, Hon'ble Minister of Human Resource Development , Govt. of India.

Miranda House participated for the first time in this important ranking initiative of MHRD in 2017 to emerge as a clear winner. It was a special privilege to join the galaxy of top institutions in other categories such as the Indian Institute of Science, for a historic photograph.

Miranda NIRF Team: The NIRF application requires intense work and submission of detailed data on many parameters. The team was ably led by the Principal Dr. Pratibha Jolly and Dr. Mallika Verma (NIRF Coordinator). They were joined by Ms. Anuradha Khattar and Dr. Ritu Gupta.