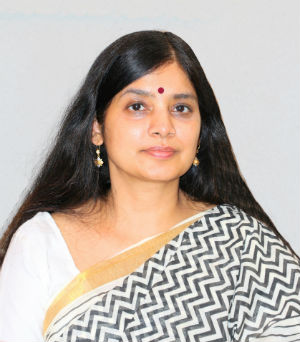 Dr. Bijayalaxmi Nanda joined Miranda House in 1993 and is an Associate Professor in the Department of Political Science. She is currently the Acting Principal of the college.

She received her Ph.D from the Centre for Political Studies, Jawaharlal Nehru University, New Delhi. Her research interests include gender, political theory and human rights. Her publications include, Discourse on Rights in India: Debates and Dilemmas (Co-editor), (Routledge, London, 2018), Sex-Selective Abortion and the State: Policies, Laws and Institutions in India (HarAnand, 2018), Understanding Social Inequality: Concerns of Human Rights, Gender and Environment (Co- editor) (Macmillan, 2010) and Human Rights, Gender and Environment (Allied, 2006). She has numerous articles in reputed journals to her credit. She is currently working on the issues around declining child sex ratio, sex selection, gender, policy and governance. She is the general editor of Shakti Books, a series on writings on gender issues by Har Anand Publications.

She is a recipient of the ICSSR Doctoral fellowship and the Delhi University Vice Chancellor's Teacher's Excellence Award in 2017.

She is actively associated with a number of government and non-government organisations as advisor on gender, policy and advocacy programmes for the youth. She supports the One Billion Rising, the global campaign on violence against women and the Centre for Advocacy and Research (CFAR) on their various programmes. She is a member of the Academic Stand Against Poverty (ASAP), a global body of academics developing ways to collaborate on issues of poverty and a member of the civil society network, Girls Count.

She has assisted various state governments in drafting policy related to women and girl child. As a policy analyst she has extensively analysed the public policies relating to family planning, human trafficking, Conditional Cash Transfers for the girl-child, housing for women, etc. In addition, she has provided technical assistance on gender issues to UNFPA, UNDP, UNIFEM and WHO, apart from a score of Non-Government Organizations in India. She is the Project Director of ICSSR project under Centre for the Study of Developing Societies (CSDS) titled "Declining Child Sex Ratio and Violence Against Women: Examining Girl-Child Discrimination in India".

She is a member of the Advisory Committee on PC-PNDT Act of the Government of NCT of Delhi. She has been a research advisor to the National Commission for Women (NCW) and a member of the core committee on the issue of sex- selective abortion, Ministry of Health & Family Welfare, Government of India. She is the former presiding officer of Internal Complaints Committee (ICC) of Miranda House for the prevention of sexual harassment. She is also the external member of IIC of two organisations - Johnson and Mathey and Clinton Health Access Initiative (CHAI).

She has extensively travelled in India and abroad in connection with her academic, research and activist pursuits, including to the USA, the UK, France, Belgium, Sweden, Brazil, Bangladesh and Nepal. She has participated as an invitee in the Academic Forum at the India, Brazil & South Africa (IBSA) Summit at Brasilia, Brazil in 2010 and in the NGO Panel of the 60 th session of the Commission on Status of Women (CSW60) at the United Nations Headquarters in New York in 2016.